Many observers of German politics were surprised and puzzled by German Chancellor Angela Merkel’s approach to the huge influx of refugees. Angela Merkel was not known to “lead” public opinion, but rather as a strategic by-stander adapting her positions to public opinion shifts on pressing issues. For this reason, Merkel earned a reputation of coldheartedness and was oftentimes perceived as an opportunistic vote-seeker. Her behavior during the refugee crisis, though, seems to challenge this popular perception – at least to a certain extent. First, from the very beginning Angela Merkel did not make a secret of how she intended to respond to the crisis and, thus, aimed to lead public opinion. Second, both her rhetoric and mimic in regards to refugees appear to be less coldhearted and more driven by a feeling of solidarity and compassion.

In this blog we describe how Merkel’s position on the crisis developed overtime – both in substance of her position and in the rhetoric she used to communicate the latter. [1] To this end we undertook quantitative text analysis of nine major speeches, interviews and press conferences she gave since 2014 on the topic. [2] 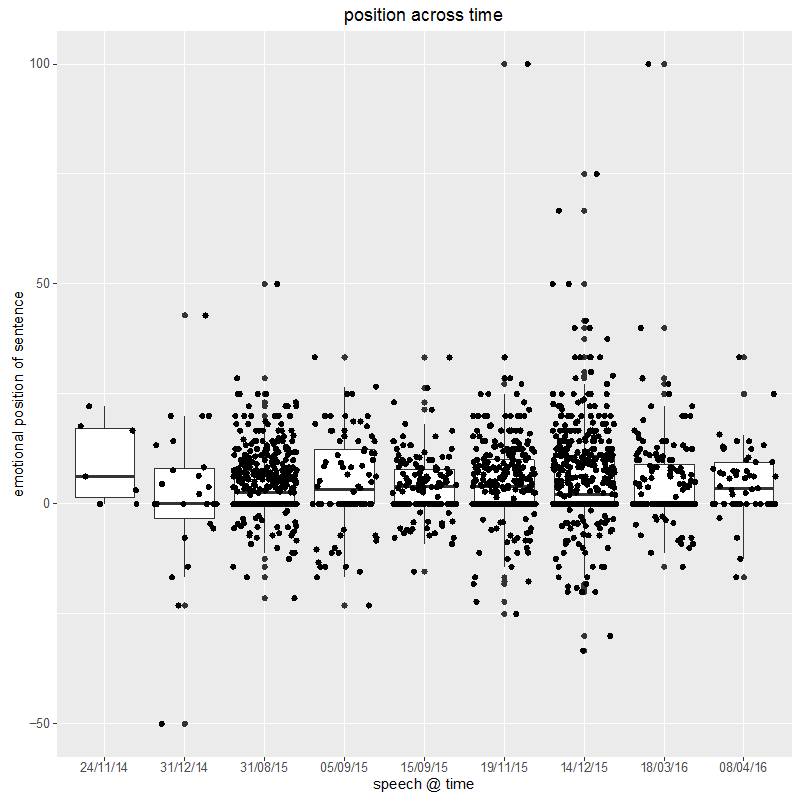 From the beginning of the crisis, Angela Merkel’s take on the global refugee crisis has been an optimistic one – a position most prominently expressed in the sentence “Wir schaffen das” (we can do it). Soon this expression turned into a symbolic theme for Merkel’s refugee policy. Emphasizing openness, solidarity and humanity, the German Chancellor pursued a very liberal and tolerant approach to the admission of refugees initially.To find out whether this impression can be supported by her rhetoric we used dictionary-based sentiment analysis. Dictionary-based sentiment analysis matches the words used in Merkel’s speeches with two pre-defined dictionary lists of “positive” and “negative” words.[3]

In figure 1 we show the overall sentiment of each sentence that Merkel used in her nine speeches.[4]A positive value on the vertical axis indexes a sentence with an overall positive sentiment. Quickly it becomes apparent that across all nine speeches Merkel’s overall tone was positive. The figure also shows that Merkel especially relied on emotional rhetoric when talking about the refugee crisis during the late speeches in 2015. This period also marks the climax of her liberal position coinciding with the decision to allow thousands of refugees into Germany from Hungary with neither control nor registration at the German border. This policy had received praise and acceptance in the beginning. But as more and more refugees entered the country and the perceived impact on the general population took on a new dimension, Merkel found herself increasingly put under pressure. Yet, despite strong criticism the Chancellor repeatedly reinforced her initial policy theme, thereby displaying unprecedented persistence during her term of office. Furthermore, even though Merkel has not undertaken an official positional turn on her refugee policy, we can observe some changes over time: The Chancellor adapted her focus on the topic and her general approach to address the crisis.

In her earlier speeches, Merkel mainly addressed the question how to deal with newly arriving refugees in Germany. Thereby she accentuated the importance of accelerating asylum procedures, providing infrastructure and the need for integration efforts. Towards the end of 2015, the Chancellor’s emphasis and framing of refugee-related questions changed increasingly away from Germany itself to the origin of the refugee flows and possibilities to reduce the number of refugees arriving in Europe. Stabilizing the situation in Syria, abolishing illegal migration, and enforcing a consistent repatriation of refugees have become the core elements of Merkel’s policy direction. That something has changed became evident at the latest when the Chancellor refused the direct reception of thousands of refugees from Idomeni earlier this year even though the situation confusingly reminded observers of the crisis in Hungary in September 2015.

Rather than a renunciation of her fundamental course this can be best understood as a gradual turn to a more Realpolitik oriented approach that Merkel continued with the recent readmission agreements between the EU and Turkey. The deal aims at reducing the number of illegal migrants reaching Europe by tugboat by means of a consistent return of refugees to Turkey and a limited admission of legal migrants from Syria to Europe. Whether the agreement will meet its expectation remains to be seen; critical voices are growing louder already. These empirical observations are again partly reflected in our data.

Figure 1 shows that, even though Merkel’s overall tone is still positive in her speech from March 2016, she relies less on a positive rhetoric than she had before. Finally, as stated earlier Merkel’s compassion and commitment to the crisis deviates from her previous behavior to a certain extent. To better understand this change in behavior it is important to address the question how the refugee crisis as such differs from other concerns Merkel had to deal with as Chancellor. Previously, Merkel’s time in office had largely been characterized by economic issues – such as the financial crisis and the Eurocrisis. The refugee crisis, however, has been inflated with cultural concerns from the start. In contrast to economic issues, cultural issues by definition lead to a different style of debate. Debates around economics are preliminary driven by rational and mathematical considerations, while discourse on cultural concerns are more driven by anxieties and perceived threats to cultural origins and traditions. Hence, culturally connoted debates are much more likely to be led by sentiment and emotions. This difference between cultural concerns and economic issues can then explain why dealing with the refugee crisis demanded different reactions from the Chancellor than ever before during her time in office. 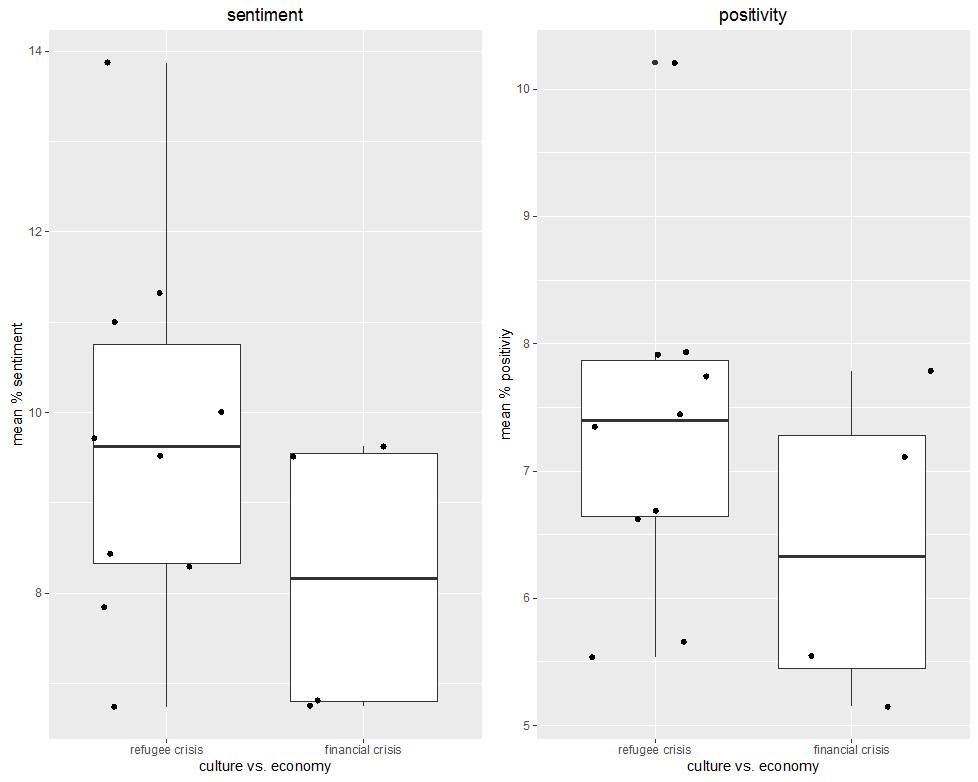 By comparing the sentiment on nine speeches Merkel gave on the refugee crisis with four speeches on the financial crisis,[5] we find support for our expectation that the rhetoric used is a different one. The results are displayed in figure 2. On the left hand side we compare the amount of sentiment (positive + negative words) she used in each sample of speeches. Even though we here compare a relatively small sample of speeches some tentative conclusions can be drawn. As stipulated by the considerations outlined above, Merkel relied more often on emotionally loaded words in her speeches on the refugee crisis — with a mean of 9.6% of emotional words in her speeches on the refugee crisis. On the right hand side we report the mean percent of positive words used in both samples and again Merkel relied more often on positive rhetoric when talking about the migrant crisis.

[1] We relied on the major speeches debated in the media and downloaded the texts from the chancellor’s webpage. First, we deleted all paragraphs in which Merkel spoke about different topics. Second, we cleaned the texts, deleted numbers and lowered all words. The speeches are not randomly chosen. They mark key moments during the refugee crisis and how Angela Merkel reacted during these moments. Third, we created a matrix splitting all texts into sentences.